As the Arctic sea ice melts, it makes room for the ocean’s apex predators, killer whales, who even feed on other whales. More and more sightings of killer whales, or orcas, have been reported in the Canadian Arctic.

“Receding sea ice and the resulting increase of orcas in the Arctic are ecosystem impacts we are already experiencing as a result of climate change. When new predators like orcas move in, they can change the entire ecosystem. In the face of these ever increasing, deeply concerning changes, we need leadership and action to reduce greenhouse gas emissions in order to protect the best interest of people, the Arctic and the entire planet.”

So far, killer whales have only ventured into the Canadian Arctic. But it’s possible they will continue to move further north, deeper into the Arctic Ocean, in the future. More research is needed to confirm their exact movements.

An amazing six baby orcas were born this year in the Puget Sound off the state of Washington, bringing the population up to 83.

The most recent calf, spotted in late October, was born to J pod and is the third calf to join the pod this year. Designated as J53, the calf was seen traveling with a 38 year old female called J17, assumed to be his mother. The second most recent calf was spotted in early September and was designated as L122, as she was born to a 20-year-old killer whale from L-Pod known as L91.

The Southern Resident killer whales make up three distinct pods and live on the West Coast between Monterey, California, and Canada’s Queen Charlotte Islands all year. Researchers track them via photo confirmation, identifying them by unique black and white markings and variations in their fin shapes.

Last July, the area’s killer whales numbered 78, making them highly endangered. Their numbers have fallen by approximately 20% since the mid-1990s, mainly because their preferred prey, chinook salmon, is also endangered. They also struggle because of pollution, habitat disturbance and other various reasons.

Another issue for the whales is that only 50% of the orca calves survive. Senior scientist with the Center for Whale Research, who keeps the official census of Puget Sound orcas for the federal government, Ken Balcomb says:

“We’re excited. They passed the dangerous part. We’re not in the clear yet. They’ll be weaning in a year. They have to make it there and have to learn how to eat and have to have food to eat. But we’re upbeat.” 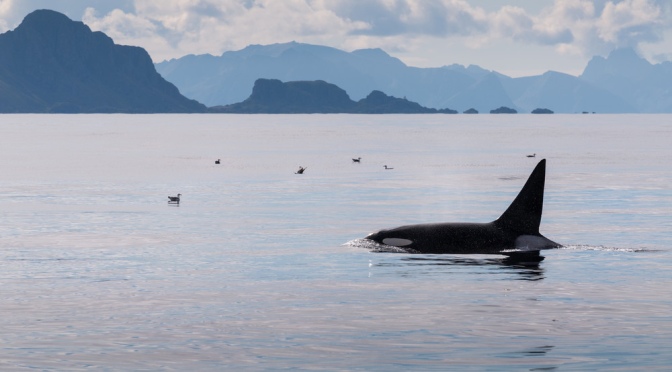 The event is in its third year and is hosted by The Whale and Dolphin Conservation (WDC), a global marine organization. Experts in the field come together to share their conservation efforts and experiences to help these intelligent mammals.

Two of the event presenters are killer whale researcher Ken Balcomb and former SeaWorld trainer Dr. John Jett. Both were featured in the award-winning documentary Blackfish, which brought the issue of ending whale and dolphin captivity to the public’s eye.

“The public understands that captivity is cruel and unnecessary. We now live in a world where people can see these majestic creatures in their natural habitat and realize that an isolated concrete cell is no substitute for an ocean home.”

So how will you celebrate World Orca Day?

5 quick and fun facts to know about orcas – or killer whales – on World Orca Day:

There was an error retrieving images from Instagram. An attempt will be remade in a few minutes.